Start a Wiki
History of the Mandalorian Clans 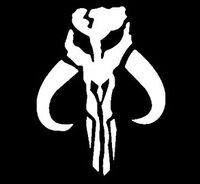 The Mandalorians have a long and turbulent history, but they have always survived. They cannot be destroyed, for they are not a species bound to one planet, but a culture and ideology. It takes only one person to keep the Mandalorian way alive. Thus, in recent history, it would make sense that one Mandalorian would be able to return the ancient warriors to the galactic stage.

In the final stages of the Great Zygerrian Warrior, Republic mercenary commander Aga Awaud returned to his homeworld of Mandalore and began a hunting guild for local wartime veterans. In the aftermath of the war, however, raiders had taken to pillaging and bullying local worlds for supplies and credits. Awaud and his hunting guild become more of a local militia defending the Mandalore system from raiders, but the troubles did not stop there. The Candorian plague remained another big trouble, one which had wiped out most of Awaud's own clan just years earlier. With all these troubles beginning to overwhelm his guild, Awaud summoned Mandalorians from all across the galaxy to come home. This would later be remembered as the 'Return'. Awaud's army would go onto defeat the raiders and return stability to the Mandalore system. For his command of the Mandalorians during this difficult time, Awaud was awarded the title of Mandalore, the name of the Mandalorians' warrior king, and dubbed 'the Uniter', both of which he reluctantly accepted. The Uniter went on to industrialize the Mandalore system and, under his adminsitrative rule, the Mandalorians became a symbol of stability in the frontier. However, in a shocking duel, the old Mandalore was killed and replaced by a young and upcoming warrior. This new warrior, the Usurper, went on to ally with the Sith and join them in their conquest of the Republic, promising his followers a challenge worthy of a Mandalorian. The new Mandalore personally led many of these charging, including most famously the attack on the Jedi Temple, where he stole the ancient Darksaber and claimed it as his trophy. With the war against the Republic over and their bloodlust sated for the time, the Mandalorians went inactive, pursuing more mundane mercenary work, awaiting the call of their Mandalore once more...

Retrieved from "https://starwarsrping.fandom.com/wiki/The_Mandalorians/History?oldid=5597"
Community content is available under CC-BY-SA unless otherwise noted.