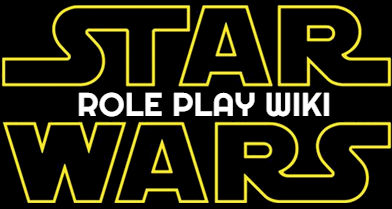 Welcome to Star Wars Role Play Wiki! Here we will role play the renowned Star Wars saga. Our timeline takes place during the canon Old Republic era. In this wiki, you can make your character, whether it be a valiant Jedi Knight, a dastardly Sith Lord, a daring bounty hunter, and even a brave little droid! The possibilities are endless! If you have any further questions, please consult our policies, feel free to stop by chat, or contact a member of our staff. We're happy to help out!

The current year is 5 AFR.

The Galaxy at a Glance 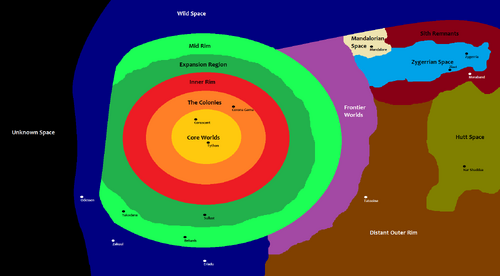 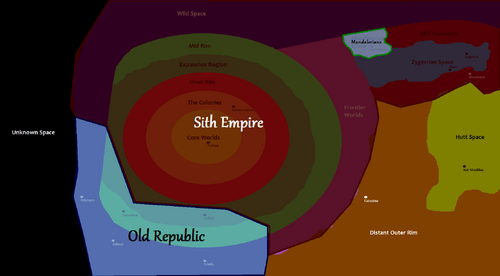 The Story So Far...
A long time ago in a galaxy far, far away...
Pre-War History


In the thousands of years before the rise of Darth Vader, there was only the Old Republic and its valiant Jedi Knight defenders. After recovering from a long Dark Age, the Republic had begun to expand her borders from the Core Worlds steadily toward the Outer Rim. It was believed that it was the Republic's destiny to spread civilization to the frontier worlds.


The Republic's rapid expansion eventually culminated into a showdown between them and a large state that, unlike most, had no interest in being absorbed by the Republic; the Zygerrian Slave Empire. There was heavy debate on the situation and what to do. Warhawks within the Republic declared that the Zygerrian Empire, which thrived in the market of slavery, was an evil empire that deserved to be overthrown and thus a war against them was ultimately righteous. Ultimately, the Republic chose war.

The Jedi Order was just as fragmented. Many within the Order believed it did not effect them, therefore they should not intervene. Others believed that the Republic was acting more out of self-interest rather than out of a desire for justice. Many young Jedi, however, supported the war, whether out of fervent loyalty to the Republic or simply believing the Jedi could not stand by and watch the miscarriage of justice. Some radicals even joined the armies of the Republic.

In the end, the Republic emerged victorious, though not without taking damage to themselves. Whether or not it was a war of justice or a war of expansionism, it had long reaching consequence and it would be remembered in the years to come.


Decline of the Republic


The war against the Zygerrian Empire was a war hard-fought and won by the Republic, but it came at a heavy cost to the Republic. The numbers of soldiers had dwindled drastically and the Republic Navy had taken heavy losses against the formidable Zygerrian Armada. Expansion came to a halt and the economy began to suffer.

The Republic attempted to abate this problem through the hiring of mercenaries to keep the peace, hiring explorers to discover new lands, and entice settlers to explore new-found worlds. The cost of repairing the infrastructure damaged by the war, maintaining such a large but stretched force, and combined with the crippling costs of maintenance across millions of worlds began to weigh on the Republic.

Meanwhile, disagreements in the Jedi Order reached a breaking point. Withdrawing themselves from galactic politics to deal with internal problems, the Order first expelled radicals who went off to war despite the Jedi Council's decision to remain neutral. Many more vocal dissenters were banished, but some, such as the Jedi historian Phanius, voluntarily stepped down, disillusioned with the Council. These Jedi would become known as the Fallen Fifty, and a great many of them left the Republic for unknown space, expected never to be heard from again.


Ruins of the Republic


The embittered Master Phanius explored the Unknown Regions for many years before coming across a world known as Moraband, the homeworld of an ancient red-skinned race of Sith. The world, which ironically enough had been a source of slaves for Zygerria, was host to a primitive and barbaric society. They interpreted Phanius' arrival as some sort of prophesied advent. Taking advantage of this, Phanius took on a new name: Darth Ruin. The title Darth was of the ancient Sith tongue, and the name he chose, Ruin, reflected the ruined society of which these barbarians came from, and what would be the ruins of the Old Republic.

"There is nothing, only me," his code would say. His kingdom revolved around him, but Ruin wasn't satisfied with just a small star kingdom. He dreamed of an empire. Ruin's first move was allying with old Zygerrian slavers who wanted vengeance against the Republic, whilst painting the Republic out to be a boogeyman whom would slaughter them. To his people, Ruin was their valiant protector. His people followed him without question. And thus, they had begun to prepare for their great war.

The slavers provides cargo ships and rudimentary weapons training to what would become the Sith troopers. Nearby worlds, such as Ziost, contained abandoned factories and armories of a begotten age, which would become the arms and ordinance of the Sith Empire. Old droid foundries were reactivated. The last step to Ruin's grand plan was unifying the Mandalorian clans under one banner. The Mandalorians were legendary warriors. Under Ruin's banner, he promised them the challenge of battle which was so valued and entrenched in their culture. They followed him with fiercely unrelenting loyalty. Finally, was the Sith Empire ready for their war.

The first strikes of the war were quick. Using old Zygerrian hyperroutes, the Sith Fleet launched a surprise attack which launched the Republic in chaos. By the time they had gathered word of the attacks, it was too late to stop the Sith advance. Within a year, the Core was under blockade. Within two, the Sith Empire razed Corona Gema, the treasured capital of the Old Republic, to the ground in a fierce orbital bombardment which killed the Supreme Chancellor and much of the political leadership. By then, the war had seemed all but lost. The galaxy was in a daze. The timeless Old Republic had fallen. Or so they had thought...

The Supreme Commander, in the midst of the chaos at Corona Gema, had taken political and military command of the Republic forces and ordered a full retreat to the last major Republic stronghold in the Mid Rim. Oddly enough, the Sith did not pursue or finish the job. Perhaps, arrogantly, the Sith believed the Republic already to be dying, if not dead. Perhaps they wanted to consolidate their power.

The Sith's actions, while brutal, presented a strong image to the common people. In contrast to the stagnating and slow-to-act Republic, the Sith Empire had achieved so much in so little time. What all the Republic gained in fifty years, the Sith had gained less than two. This, combined with Darth Ruin's powerful speeches to the people, made them quite popular and the transition was smooth.

The Jedi Order watched and waited. That was a mistake. Darth Ruin ordered their deaths. First the Sith Fleet blockaded Tython. Then the surface was bombed, making way for a land invasion. Darth Ruin's personal enforcer was sent to command the battle--nay, the massacre that took place there. After that fateful day, barely a hundred Jedi remained.

Have you ever wanted to be like Goku, Vegeta, Piccolo, or Frieza? Live the Dragon Ball experience today at World of Dragon Souls, a website with over 80+ players and counting!

Retrieved from "https://starwarsrping.fandom.com/wiki/Star_Wars_Role_Play_Wiki?oldid=5430"
Community content is available under CC-BY-SA unless otherwise noted.